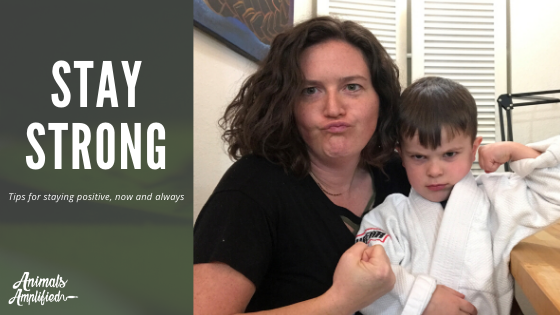 Wow. What a couple weeks this has been. The United States is facing a situation that has always seemed like something out of a history book or something that should be happening in a foreign and far away land, but this pandemic is happening here, right in our backyards, in some of our homes. I’ve talked with other leaders and keepers over the past couple weeks and heard the hard stories.

But if you focus on all of that….that’s all you’ll see.

People have also helped other people. I’ve seen images of toilet paper in a box on the side of the road or in neighborhood libraries. I’ve seen people sewing masks for nurses. I’ve seen offers of help. I’ve had the pleasure of taking our animals to do window visits at the nursing home. I’ve had the pleasure of talking even more often with my friends and family. I’ve driven to our kids school to pick up lunch and breakfast and see familiar faces. I’ve been in the meetings where we’re having the hard conversations between loans, bankruptcy, lay offs, or surplus. I’ve been approached by employees volunteering to take a pay cut if it means their team members can stay.

Moral of the story is that this is hard. This is going to get worse before it gets better. Things won’t be the same afterwards. Not everyone will be okay.

I talk about fear, stress, and personalities a lot on this blog, in my courses, and on my podcast. Fear and stress make us resort to fight or flight. The blood is literally diverted away from our brain to the organs that help us fight or run. Learn to recognize that feeling, acknowledge those thoughts, say them outloud to someone, point to where they are physically manifesting themselves, and breathe.

Then shift your mindset in one of the following ways:

Focus on the positives

Do something for someone else