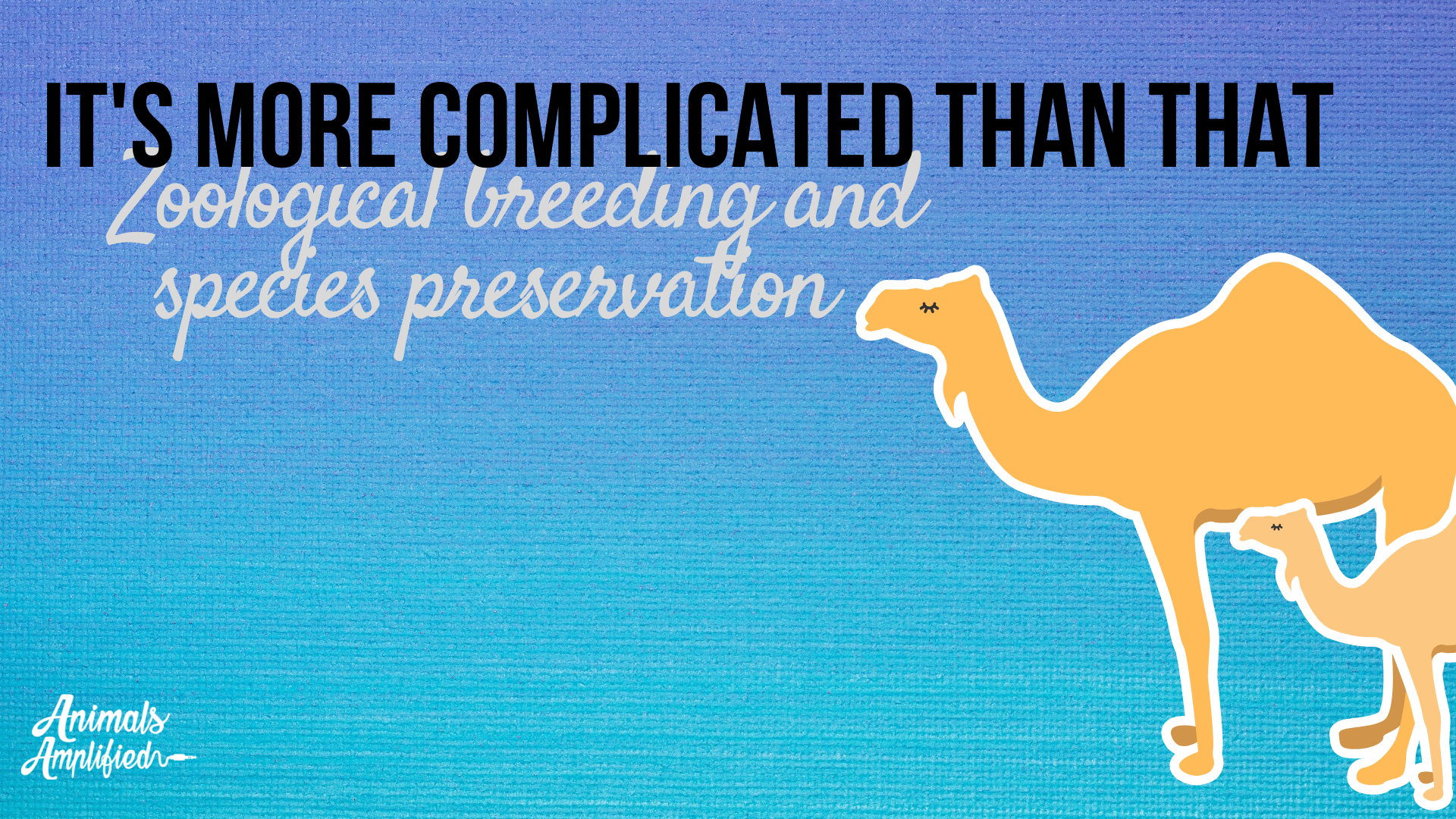 To breed or not to breed? That is the question. SSP, AMP, TAG, AZA, ZAA, EAZA, WAZA, IUCN, CITES, PMC…. we’re drowning in information and sometimes only getting a black and white view of zoological breeding and species preservations. I’ve promised to talk about how so many things are more complicated than they initially seem. Today, we’re talking about: it’s more complicated than that – Zoological Breeding and Species Preservation.

I’ve worked in both the private and public sectors. Some of the institutions I’ve worked at were open to the public, and some were not. I’ve worked at facilities where breeding was a focus and others where an armadillo baby was big news! It seems the jury is still out on how we should be managing our collections and preserving species.

“Only breed if they are endangered!”

“You should only be pairing up animals if there is space for their offspring.”

“Animals should never be on birth control.”

“Breeding and raising young are important components of animal welfare.”

“Animals have the right to reproduce.”

“Surplus animals should be culled.”

I could keep going, but the point is that it’s all more complicated than any of those statements above. Some of those complications and challenges come to the forefront in Taxon Advisory Group (TAG) meetings, where the Species Survival Plan (SSP) updates are given. Each year when the Tiger SSP produces and releases it’s “Breeding and Transfer Plans” and “Studbooks,” the challenges are always the same.

The answer the Tiger SSP has proposed is to encourage zoos to phase out “generic” tigers. This mostly means Bengal tigers so that they can make way for species like Sumatran, Amur, or Malayan tigers.

It makes a lot of sense! However, there may be other alternative solutions. The SSP is an Association of Zoos and Aquariums (AZA) program. AZA only represents 30% of ALL the big cats held in the United States. Working outside of AZA with other facilities might open up the opportunity for more space, more holding, and more breeding opportunities. Recently it seems that AZA plans to do this less. They are bringing many of their animals and programs back “in-house.”

A controversial study also concluded there are only two tiger subspecies, which would mean more accessible opportunities for breeding, placement, and holding if we weren’t worried about managing four different populations. If we follow the advice of this study, we would manage two different subspecies: Sunda tigers, made up of Sumatran tigers plus the extinct Javan and Bali tigers, and continental tigers, encompassing all the rest. This would mean that we could breed animals that we previously maintained separately and incorporate the “generic” population of tigers in non-AZA and private institutions. Surely our inbreeding coefficient would look a lot cleaner if that were the case.

Reproductive biologists are becoming concerned that one of our biggest challenges is that animals that don’t reproduce early and often are less successful breeding later in life. So when we halt breeding either by separation or birth control because there isn’t space to place the offspring in AZA facilities, we risk losing those genetics forever.

However, if we swing the pendulum in the opposite direction and allow animals to breed whenever and wherever they like, we run into challenges like surplus animals and inbreeding.

We haven’t quite perfected the use of birth control in all our animal species. The birth control methods we’ve used have resulted in permanent sterilization or unsuccessful breeding altogether. To prevent using birth control in species where we know it can be an issue, we often form bachelor groups or female family groups. Some of these groupings may be stressful for the animals since living in bachelor groups is not always common in all species.

Let’s talk about inbreeding for a minute. For us humans, it’s simple: Inbreeding is bad. (Unless you’re royalty or a pureblood wizarding family like the Malfoys). Since we think it’s bad, it must never happen in the wild, and we certainly need to make sure it doesn’t happen in our care.

Let’s think for a second about a wild lion pride. We know that it is made up of one breeding adult male and a group of females who are often related. We also know that when male lions are born in the pride, they are forced to leave at a certain age. This is a natural control to reduce inbreeding within the pride, right? What about the daughters? They stay in the pride, and when they reach sexual maturity, who do they breed with? This is the same phenomenon for most herd, group, and pride species.

Zoological breeding and species preservation sometimes can be counterintuitive. When we allow animals to breed naturally, we have the challenge of space and placement. Most facilities can not house more than a small group or pair of any given animal since the guests like to see variety in collections. As we become increasingly exclusive regarding who we will work with and who we won’t as facilities placement gets even more challenging. There are different ways zoos have handled surplus animals historically, and not all of them are popular. In some facilities “across the pond,” it’s not abnormal to cull surplus animals and use them as food for other animals in the facility.

Other facilities have sent animals to non-AZA zoos, game ranches, exotic animal auctions, and private ownership. We’ll talk more about all of these topics in future articles.

It’s more complicated than that.

The point here isn’t to provide a clear and straightforward answer. This series aims to demonstrate how complex and complicated some of these issues are. There likely isn’t a right and wrong, good or bad answer. It’s more complex than that. When it comes to zoological breeding and species preservation, I believe it will require us all to work together to succeed in saving species from extinction.

Other articles to check on the topic

highlights some of the challenges: