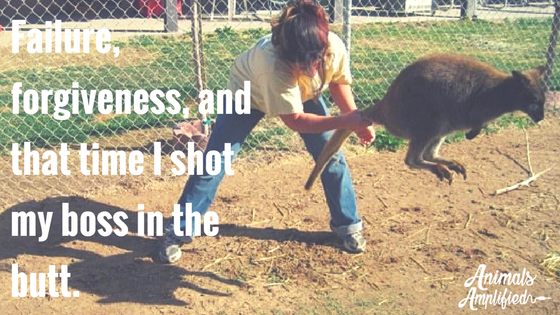 Failure, forgiveness, and that time I shot my boss in the butt

Forgiveness can be a challenging thing when one of your employees screws up.  I learned some amazing lessons early in my animal career about having fun at work, not sweating the small stuff, forgiveness, and failure.

One fine day we were catching up a male kangaroo joey and sending him off to another facility.  Kix was the boomer of our mob and one of his joeys was getting too big to keep doing his laundry at home.

Kangaroos are known to suffer from capture myopathy.  Warning technical stuff: This is when lactic acid builds up in the bloodstream due to stress caused by capture.  That acidosis then causes the heart to slow and shunt oxygen away from the muscles resulting in the death of muscle. When muscles die they excrete myoglobin which affects organs like the kidneys, liver, and lungs.  This can result in the death of an animal days after it’s shipped to another facility.

Okay enough with the technical stuff…the point is we didn’t want this to happen to our joey.  Since sedating an animal for shipment wasn’t an option we were planning on administering a shot of Bo-Se which helps to prevent death from capture myopathy.

Let’s recap the plan in detail:

Sure enough steps 1-4 were accomplished by my literally fearless leader in less than 5 minutes.  Then it was my job to give the injection.  Val was straddling the roo backwards, holding his tail her hands.  I needed to get the injection in to his hip….he wasn’t exactly holding still.

Envision a tiny gymnast at a kangaroo rodeo and I think you have a pretty good image of what was happening.

Val shouted, “NOW!” in a moment of calm and I jabbed the needle…..right in to Val’s rear end.  Horror struck my face.

I got the roo on the second jab and she put him in his comfy crate full of hay for his ride to the airport.

Then she literally fell to the floor laughing.

After she stopped laughing, she called her husband, and told him what I’d done, then laughed some more.  As a matter of fact she spent the whole next year re-telling and laughing about the story.

She could have been pissed, she could have never let me try again.  Heck, she could have fired me.  But she didn’t, she laughed it off and kept laughing it off.  She gave me chance after chance, and let me learn things on my own over and over even at her rear-end’s expense.

Fearless leaders do just that.  Since they aren’t afraid of failing, they don’t mind if others fail around them.  They see failure as an opportunity for greatness.

So go be great and inspire greatness.

Download our failure award and reinforce someone for being fearless!